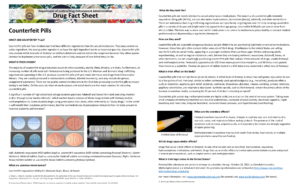 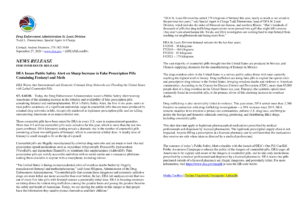 This morning the Drug Enforcement Administration (DEA) issued a Public Safety Alert to warn the American public of the alarming increase in fake prescription pills containing fentanyl and meth. These counterfeit pills are easy to purchase, widely available, and often contain deadly doses of fentanyl. DEA warns that pills purchased outside of a licensed pharmacy are illegal, dangerous, and potentially lethal. This alert does not apply to legitimate pharmaceutical medications prescribed by physicians dispensed by pharmacists.

According to the Centers for Disease Control and Prevention, last year more than 93,000 people died of overdoses in the United States, marking the largest number of drug-related deaths ever recorded in a year. Fentanyl, the synthetic opioid most commonly found in counterfeit pills, is the primary driver of this alarming increase in overdose deaths.

DEA agents, in partnership with federal, state, and local law enforcement agencies, have seized record amounts of counterfeit pills containing deadly doses of fentanyl. Officials also report that increasingly, methamphetamine is being pressed into counterfeit pills. Drug traffickers are using fake pills to exploit the opioid crisis and prescription drug misuse in the United States. More than 5 million counterfeit pills have been seized this year. At this unprecedented rate, more counterfeit pills will be seized in 2021 than in the previous three years combined.